The nominations are in, and the 2022 Oscars are set to be an unforgettable evening celebrating the year’s most impactful work in film. On March 27, writers, directors and actors alike will return to the Dolby Theater in Los Angeles, California, for the 94th annual Academy Awards. You won’t want to miss tuning into this potentially historic evening in Hollywood.

The Power of the Dog starring Benedict Cumberbatch, Kirsten Dunst and Jesse Plemons leads this year’s awards with a total of 12 nominations, with Dune following close behind at 10.

The 2022 Academy Awards are already making history with some significant firsts among the nominees and record-breaking nominations. Troy Kotsur became the first deaf actor to be nominated in the Best Supporting Actor category for his role in CODA. Ari Wegner became the second ever female cinematographer to be nominated for an Oscar for her work in The Power of the Dog. And Denzel Washington broke his own record as the most-nominated Black actor in Oscar history, at 10 nominations.

Keep reading to find out everything you need to know about watching this year’s Oscars. If you need to catch up on watching all the nominated films, be sure to check out ET’s guide on how to watch all the movies nominated for Best Picture this year.

The 94th annual Academy Awards will take place on Sunday, March 27. The broadcast will air at 8 p.m. ET/5 p.m. PT on ABC. If you've recently cut that cable cord or don't have a TV antenna that will let you access ABC for free, keep reading to find out how and where you can still watch the Oscars live in real time online.

Who is hosting this year's ceremony?

This week, it was reported by Variety that Regina Hall, Amy Schumer and Wanda Sykes will serve as hosts for this year's ceremony. This will be the first time that multiple women have hosted the Oscars since Ellen Burstyn and Jane Fonda joined Warren Beatty and Richard Pryor to emcee the 1977 Academy Awards. The ceremony has gone without an official host since 2019. Actors Tracee Ellis Ross and Leslie Jordan hosted this year's nominations show, which took place on Feb. 8.

How can I watch the Oscars without cable?

Streaming services that offer live TV, like Hulu + Live TV and FuboTV will allow you to watch the Oscars in real time without cable on March 27. Both streaming platforms offer 7-day free trials, so if you're a new user take advantage of the free period when the time comes to watch this year's Academy Awards ceremony.

Hulu + Live TV
Hulu
Hulu + Live TV
A subscription to Hulu + Live TV includes access to ABC, so subscribers will be able to watch the 2022 Academy Awards live in real time. Subscribers can also stream Oscar-nominated films such as "Spencer," "Nomadland" "Parasite" and more on Hulu.
$70 AND UP MONTHLY
Fubo TV 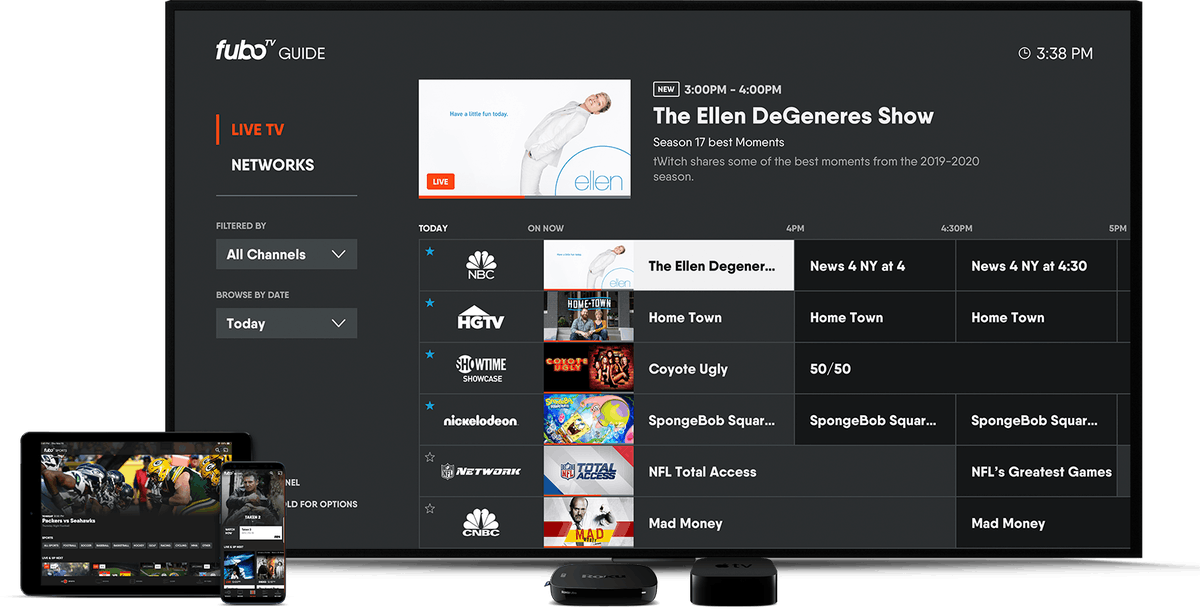 Fubo TV
Fubo TV
FuboTV gives subscribers access to ABC, as well as more than 100 other local channels, including AMC, ESPN and FX. FuboTV also provides a cloud DVR with the capacity to record up to 250 hours of content, so subscribers who can't catch the awards live can record them to watch later.
$65 AND UP MONTHLY

Which films are nominated for Best Picture?

The films nominated for Best Picture at the 2022 Oscars are Belfast, CODA, Don't Look Up, Drive My Car, Dune, King Richard, Licorice Pizza, Nightmare Alley, The Power of the Dog and West Side Story.

Check out our streaming guide on how to watch the Best Picture noms, along with more of this year's nominees.

Who is nominated for an Oscar this year?

This year's acting categories are chock full of historic nominations, including the first nomination of a deaf actor in the Best Supporting Actor category, and Denzel Washington's 10th Academy Award nomination, which cements him as the most nominated Black actor in Oscar history, breaking his own record.

Several actresses received their first ever nominations this year, most notably Kristen Stewart for her leading role in Spencer and Kirsten Dunst for her supporting role in The Power of the Dog. Jessie Buckley, Aunjanue Ellis and Ariana DeBose are all also first-time nominees in the Best Supporting Actress category.

This year's Best Actor nominations are Javier Bardem in Being the Ricardos, Benedict Cumberbatch in The Power of the Dog, Andrew Garfield in Tick, Tick...Boom!, Will Smith in King Richard and Denzel Washington in The Tragedy of Macbeth.

The 2022 Oscar nominees for Best Actress are Jessica Chastain in The Eyes of Tammy Faye, Olivia Colman in The Lost Daughter, Penélope Cruz in Parallel Mothers, Nicole Kidman in Being the Ricardos and Kristen Stewart in Spencer.

The Academy Award nominations for Best Supporting Actress are Jessie Buckley in The Lost Daughter, Ariana DeBose in West Side Story, Judi Dench in Belfast, Kirsten Dunst in The Power of the Dog and Aunjanue Ellis in King Richard.

Where to Stream the 2022 Oscar-Nominated Movies Online

What's New on Peacock This Month

What's New on Disney+ This Month

What's New on Paramount Plus in February

How to Watch ‘Dune' Online Before The 2022 Oscars

This video is unavailable because we were unable to load a message from our sponsors.

If you are using ad-blocking software, please disable it and reload the page.
Playing: 'The Batman': Robert Pattinson Spills on Wearing George Clooney’s Batsuit for the Audition